For months, a Times article about Julius Eastman accrued dust in my New Jersey apartment. It sat dormant within an increasingly oppressive stack of back issues, which I’d flip through daily, distracted by a thousand menial tasks. By way of a black-and-white photograph illustrating the Eastman piece, I came to know his countenance, before knowing the man himself. The image is a quadrant of four photos, shot in semi-profile. His beard is narrow; his clean-shaven head gripped softly by raised hands. He could be an obscure analogue to Rodin’s ubiquitous thinker. The cover of an archival recording, released in 2016, of Julius Eastman’s “Femenine.” Credit Andrew Roth.

What I was missing out on was the story of Eastman’s decisive importance for the evolution of avant-garde orchestral music – minimalism and postminimalism, for short. Reading about Eastman (1940-1990) now, it’s hard to know where the alienations begotten by his blackness and gayness end, and where those caused by mental illness and addiction begin. Whatever the case, all conspired to abbreviate his career, and his life. He was black and gay, and vocal about what it meant to be those things. This seems to have consigned him to oblivion within the oppressive bleach of New York’s 1960s and ‘70s music scene.

In an ongoing effort to rescue Eastman’s legacy, scrappy recordings have been recovered, cryptic scores reassembled, albums reissued, and performances staged in America and Europe. Journalistic elegies have followed, weaving remorse at Eastman’s slighting with awe over his re-agitation of this now canonical, once avant-garde form. Taking all this in, I now wish I’d dropped everything to read that article. Indeed, those words could be a metonym for the white-dominated artworld’s relationship to Eastman (and so many others) – we wish we had. Let Sonorities Ring: Julius Eastman – the current exhibition at Berlin’s SAVVY Contemporary – contributes to this effort. It is a constellatory formation of archive material, accompanied by a schedule of evening performances. There are audio and video recordings, copies of Eastman’s idiosyncratic scores, newspaper clippings, and more scholarly reflection (including a PhD thesis delivered in a no-nonsense stack of A-4 paper). All sit atop plywood shelves, girded by basic steel apparatuses. Though the thought of reading a dissertation in an art gallery is headache-inducing, SAVVY has presented this academic material without pretension, as one humble component in an open matrix of memory. Nearby, two black-and-white poster-sized photographs bypass language altogether. Amidst so much text, video, and sound, these still images stimulate the imagination to search for Eastman.

In contrast to the intoxicating experience of the musician’s work, Savvy’s show dutifully unfolds the relationship between his polyvalent output, and the culture now attempting to assimilate it. This process entails reckoning with the artist’s use of language. His warbling, flourishing, piano-and-string storms were periodically punctuated by improvised and scripted vocalizations. By way of finely-calibrated titles, oftentimes they were also inflected with the racialized and sexualized difficulty concomitant to his life. Appellations like Crazy Nigger, Evil Nigger, and Gay Guerilla (1978-79) send spasming questions through a white viewer’s self-consciousness: do I transcribe the hateful epithet in writing? Do I let it leave my lips in conversation about the show? Despite best intentions, both options seem unfree of violence. One biographer replaced the word’s central letters with asterisks. But even this seems an unknowing offence, dulling the edge of Eastman’s rightful self-definition. There is no way out of this problem; and that is the point. It’s impossible not to pick up aggression in these titles. Like mirror traps, they were clearly designed to reflect racist projections. And though Eastman scrupulously explained his use of the word as a stand-in for a quality of “basicness” – the basic fact of the dehumanized black body exploited to produce America’s originary surplus wealth – he also articulated his own radical desire. With the title Gay Guerilla, he wanted to glorify gayness itself: to invoke the possibility of a militant homosexuality, fighting poisonous normativity.

In addition to being a composer, Eastman was a singer and actor. His 1970 Portrayal of King George III in Peter Maxwell Davies’s Eight Songs for a Mad King, was regarded as virtuosic. Lavish praise is presented at SAVVY via digitized clippings, while a nearby black-and-white photograph, printed the size of a movie poster, shows Eastman in roiling character. The image transmits a buzzing furor, matched by the words of John Dwyer, a prolific writer on his work. There is a “wrenching effect,” Dwyer writes, to the king’s “straining for reason ” amid “the whirlwinds of his own mind.” 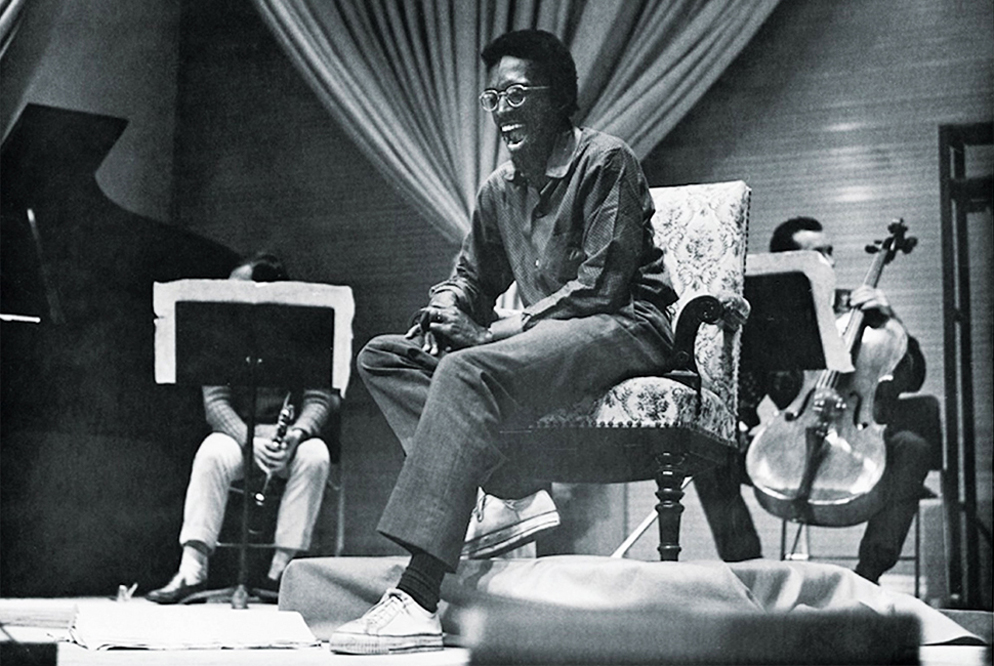 Here was a black man in 1970s Buffalo, playing a white eighteenth-century king for what must have been a majority-white audience. The wrenching, straining whirlwinds described by Dwyer can’t have been absent from the relationship between Eastman and his audience. It’s tempting to say that the role inverted racialized power. Then again, he wasn’t only playing a king, but a madman as well. It’s hard not to wonder about a connection between his casting and White America’s racist paranoias: the compulsion to portray black men as volatile and dangerous. This show keeps such important questions swirling, as they should, on the rim of easy resolution.

The photograph of Eastman as the King George III reappears in a small book titled 52 Niggers by the South African writer Stacy Hardy, which sits on a plywood shelf alongside Eastman’s hand-annotated scores. Hardy’s words form a cycling staccato portrait, mirroring the character of Eastman’s music:

Swifter than academic analysis and more polemical than reportage, Hardy’s text stands out. Eastman is remembered as doing everything at once: swaggering with “swinging hips,” working fast, writing “sentiment and soul,” orchestrating the body “as it flexes to move a pen, form a fist, make a mark, lift a drink.” This description forms an immanent tracing. As such, it stands apart from the too-ready, too-familiar narrative of genius immolated in madness, addiction, racism, and homophobia. A short slideshow gives more potent occasion to wonder how Eastman himself might have felt in context. Here, he is depicted in the countryside amidst a group of musicians – all white. He makes action paintings, wades in water, and plays the violin. Recalling a privileged Sunday-painter retreat, the demographic makeup of these photos echoes that of a concert I’d just been to at the Berliner Festspiele, in conjunction with this exhibition. In a room of several hundred people, there was hardly a single person of color – unless you count Eastman, who spoke in absentia through four pianos, and the carefully-orchestrated shouting of his players.

In a recording of the piece Stay on it (1973), one of Eastman’s musicians chants: “Stay on it… Stay on it… Stay on it… Stay On it.” The word’s have a double intonation. They speak to the cadence of the music, surely. But with the pale complexion of that concert in mind, they’ve also hung in my own head as a surreptitious piece of advice. We need to stay on it; stay on ourselves. Those now in Eastman’s shoes – working, struggling, gaslit at every turn – need no reminder that as much as things have changed, they’ve stayed the same.

A gift embedded in the trip to leafy, tony Oakville Galleries (a half-hour train ride from Toronto) is the moment you give yourself by…