I arrived at the opening of Sanctuary, artist Chen Dongfan’s first institutional exhibition in New York City, overcome with a profound sense of disorientation. It was January 30th and I was still jetlagged, having returned only two days prior from China, where the COVID-19 epidemic had steadily escalated into a national emergency. The deeper dissonance, however, sprang from the perceived normalcy – an art opening packed with friends and guests – while my memories of the nationwide pause were still vivid.

My two-week trip home spiraled swiftly from days packed with art hopping and meetings in Beijing, to self-quarantining with my family in Weihai, a costal city in Shandong province. On Weibo, where I had been frantically following the epidemic’s development, state media and independent sources perpetually clashed as they charted the bio-political and social ramifications while citizens desperately pleaded from the newly locked-down city of Wuhan. The sheer amount of raw criticism of the government’s initial response (or lack thereof) had given me some hope for certain silver linings: a more open – less censored – public discourse; my account was soon suspended due to my emotionally and politically charged participation. By the time I boarded for New York on January 28th, only ticketed passengers were allowed on the airport’s premises, which were heavily guarded by security staff in full protective gear, bearing temperature guns. I wore both face and eye masks during the first leg to Incheon, South Korean; the physical discomfort truly expanded my empathy for those who had undertaken long-haul flights fully geared. Within a week, international air travel from China was largely suspended. Being back in New York and immediately resuming work and social routines felt like waking abruptly from a lucid, post-apocalyptic dream – that is, until the pandemic’s wide-ranging ramifications caught up, and met me where I am.

The exhibition, which I curated, auspiciously brought me back just in time. Neither the artist nor I could have anticipated how its theme would compound in uncanny meaning since its conception. For Chen, “sanctuary” evokes the sacred and emotional resonance of both his personal creative space and a site-specific reference to the Sun Yat-Sen Memorial Hall in which the St. John’s University’s Yeh Art Gallery is ensconced. Built as a distinctly traditional-Chinese architectural complex on the campus of a Catholic university, the venue was itself a Cold War-era residue, its construction funded by Taiwan’s Chiang Kai-Shek administration in the 1970s as a diplomatic gesture. Fraught geopolitics aside, Sun Yat-Sen was universally venerated as the “founding father” of modern China. Myriad memorial halls and streets are named after him, but perhaps none demarcates a cultural and communal space quite like this one deep in Queens, nor signals the complexity and gravitas of historical circumstances as potently for new immigrants like ourselves. In response to this particularly idyllic site, Chen challenged himself to create a large cycle of paintings in an unusually exuberant monochrome – a radical departure from the opulent, expressive colors that had characterized his practice to date. The resulting works – sweeping abstractions occasionally punctuated with punky icons and figures – were an attempt to reconcile controlled calligraphic energy with the destructive charge of graffiti, according to the artist. To set the tone for the installation, Chen had imagined the moment after Houyi (a heroic warrior from renowned  Chinese myth) had shot down eight out of the nine suns that wreaked havoc on earth; the dead among them resumed their original form as three-legged crows, and life began to rebuild on scorched land. This moment is at once eschatological and hopeful, which makes it eerily relevant to the magnitude of change that defined the tumultuous chapters of Chinese history since the late 19th century. Many of these chapters are evoked in the very site of the Yeh Art Gallery: the colonial invasions beginning in the 19th century; the 1911 Revolution led by Sun Yat-sen, et al; the Sino-Japan Wars; and the alliance and struggles between the Chinese Communist Party and the Nationalist Party (KMT) that foreshadowed the current geopolitics of Taiwan. At the same time, the utter totality of mythological disasters increasingly parallels that of the current COVID-19 pandemic, which halted the exhibition itself, halfway into its three-month run.

Histories and disasters sometimes take on such mythological magnitude and fatefulness in their cyclical nature that ancient tales feel not only relevant, but commensurate. In the same manner that, for instance, Mexican muralists José Clemente Orozco and David Alfaro Siqueiros resorted to Prometheus as a revolutionary imaginary in response to the post-Mexican Revolution impulses of nation-(re)building, Chen Dongfan explored mythological figures and narratives in Sanctuary – though in more resonant rather than referential manner. One of the large hanging scrolls in the exhibition, The Stone Picking God (2019), features a figure bending over to reach for a large boulder. While working on the translation of the title, I consulted Chen to either translate the Chinese directly or as “Sisyphus,” the Greek character who embodied futility by repeating the task of pushing stones uphill. “It’s certainly there,” Chen would remind me: “but think also of the Chinese lores where ancient beings fought momental fights that shattered mountains and eventually required Nuwa (the goddess who created humans) to fix holes in the sky.” A few days into the exhibition, the media had made sensations of Wuhan’s temporary hospitals built over the course of a mere ten days. In most English reports they are simply “Huoshenshan Hospital” and “Leishenshan Hospital,” but they translate as Thunder God Mountain Hospital and Fire God Mountain Hospital in Chinese. The discourse around these hastily-built institutions mostly focused on the spectacle of China’s infrastructural prowess and the country’s capacity for centralized mobilization of resources, but what really struck me was the operating cultural logic that underscored their naming. There were no mountains known by Thunder God or Fire God anywhere near the sites where the hospitals were built. The naming was largely aspirational: thunder and fire are cosmic and natural elements considered to vanquish disease and evil, while mountains topologically and geomancy-wise signal a stop. Ideologically, it might appear paradoxical that in Communist China such borderline superstitious practices should enter into practical vocabulary, yet it makes perfect cultural sense: only supernatural or spiritual forces, potent beyond our mundane technologies, could help us battle such daunting and volatile challenges. While there was never serious devotion on par with the world’s major religions, the fire and thunder gods certainly boost morale. It is perhaps in the same logic that Chinese aerospace projects are often named after celestial beings of mythological and folkloric origin. Cultural pride aside, there is a certain Romantic sensibility around scaling unknown territories with older narratives – a process that also familiarizes and humanizes them, and is more than conducive to drumming up patriotic resolve.

Perhaps these mythological resonances also register the cyclical dimensions of traumatic experiences. My mind has been shrouded in constant grief and other forms of overload: prolonged media immersion and repeated heartbreak from vivid accounts of injustice and tragedy, beginning with the desperate pleas of sickened, clueless Wuhan residents on Weibo during lockdown. Before long the terror of Wuhan residents became that of Asian Americans, then New Yorkers. A crisis of this magnitude harbors cruel clarity on the human condition, as Arundhati Roy noted of the lockdown measures in India that “worked like a chemical experiment that suddenly illuminated hidden things.” Living the pandemic timeline twice over has created, in me, a déjà-vu vertigo. The sensation feels more acute in trivial markers – memes about grocery items that remain unsold during hoarding frenzies (shiitake-mushroom chicken-soup instant noodles in China; lasagna pasta in the United States) – than it does with watershed dates of exponential infection. I often imagine how such utterly mundane registers will, years and decades in the future, trigger instantaneous recall of living through all this. 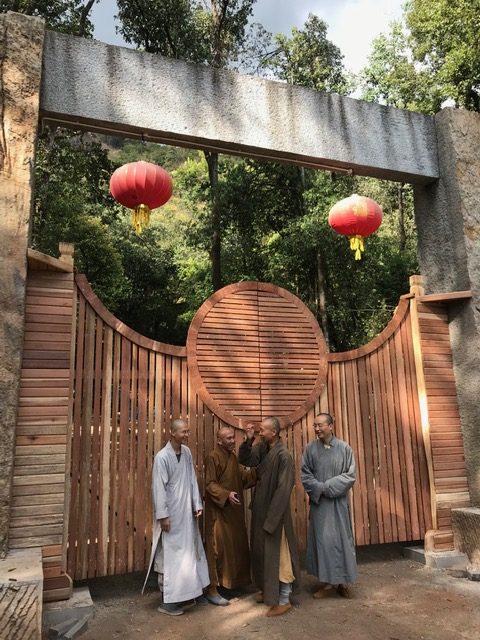 In a moment that somehow feels both futile and poignant for thinking about the capacity of art, I’m again reminded of spiritual inclinations and reckonings in some recent practices. Li Shurui, a Dali-based artist working primarily with mesmerizing abstraction has recently taken on the advisory role for a local monastery ­– the Radiant Temple at Mount Jizu – through her organic involvement with the local Buddhist communities. During the earlier days of the pandemic she participated in online streaming programs where artists produced creative content for families with children under quarantine. She also continued to develop the architectural additions to the Radiant Temple, following a particularly well-received minimalist moon gate built the previous summer. For Li, these activities have proven effective as a way to mitigate the onslaught of anxiety. Around the same time, the Beijing-based artist Zhao Yao also gravitated to sacred mountains, specifically those of the Tibetan Plateau, to continue his Spirit Above All project. Four years ago, Zhao transported his behemoth of an abstract painting (measuring 116 by 86 meters) into the majestic mountain ranges at 5,000 meters above sea level, unfurling the work with the help of Tibetan monks along a steep slope.

Much can be said about the absurdist collapsing of High Modernism’s claim to spirituality through abstract form and the obdurate, pilgrim-like search for ritualized blessing. But for the months that Zhao Yao’s work endured the elements in one of the world’s most extreme environments, it functioned almost simultaneously as a new land art, and as a medium that broadcasts to the spiritual realm, much like the still-active religious practice of rolling out large, lavishly embroidered Thangkas for public view during the Sho Dun Festival, an act that both strengthens the faith and the fabric (through exposure to fresh air and sun). There is also a certain resonance with those 6th-century monumental scriptures carved on mountains during what Buddhist practitioners then considered “end times.” While disasters – moments of existential urgency – have long been a staple in mythological and speculative genres alike, living one out as a truly global, collective, yet widely uneven experience feels like an entirely new experiment without the certainty of a familiar plot or narrative arc. Given the unprecedented amount and range of accounts that will likely be generated and preserved, our memories – and indeed historicization – of this pandemic will be a particularly messy affair. As for Chen Dongfan, who is currently quarantined in his lower Lower East Side apartment, punky devils, gentle icons, and fantastical faces of those close to him continued to proliferate into drawings of more intimate scales, visible to me as Instagram images. They simultaneously function as a quarantine diary full of psychological, fanciful portraits, sparked by registers both mundane and monumental.

Xin Wang is a Joan Tisch Teaching Fellow at the Whitney Museum and a PhD candidate in modern and contemporary art at The Institute of Fine Arts, New York University. She is the curator of numerous exhibitions in the US, Europe, and Asia, and her latest writings have appeared in Art in America, Art Agenda, and Wallpaper (Chinese edition). She is currently planning an exhibition that explores Asian Futurisms for The Museum of Chinese in America in New York City, and a discursive archive on the subject matter can be found at futurism.tumblr.com.

In the fall of 2018 the Guggenheim presented a retrospective of 19th-century Swedish artist Hilma af Klint to a zealous, if unsuspecting, audience. The…